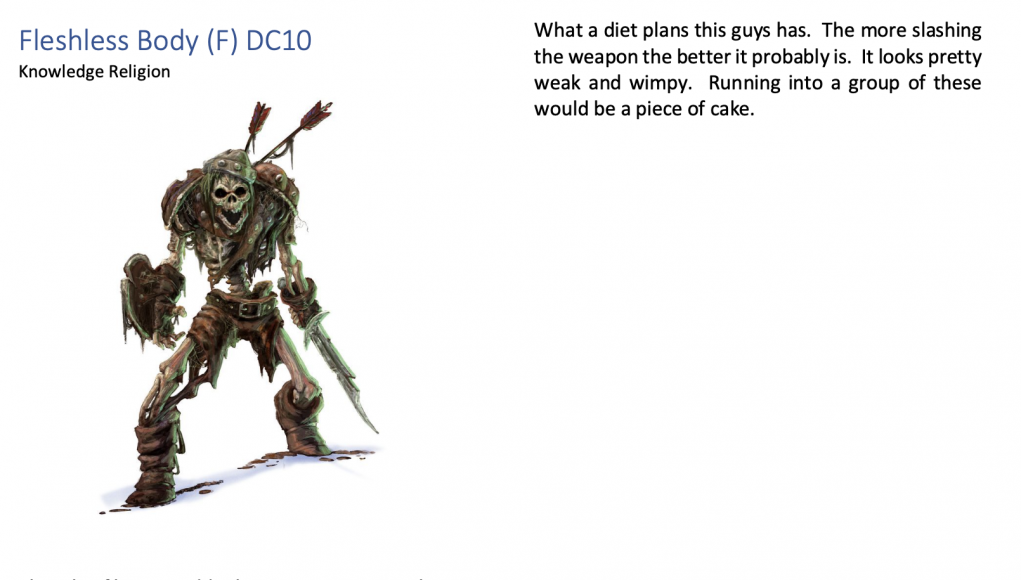 I ran into an interesting issue with my players and game mastering. I run two games a week. There is only a single person overlap between the two groups which is my wife. And a sainted woman she is for participating with us. The first group is comprised of mostly very experienced players, most of which started with Advanced D&D. They are very familiar with the current Pathfinder v1 rule set and keep me on my toes about what is in the rules or not. The second group has only ever played in my game, and only for the last few years.

For both groups we try to play weekly, but that can be difficult to my travel and work schedules. The Monday group (the experienced one) misses games rarely since my travel usually starts on a Tuesday, whereas the Friday meets on average once a month. Both sets of groups are playing through set modules, although different ones.

The issue that I found first exhibited itself in the more junior team. They had never played before, were not familiar with the rules, and did not retain much of that information between games due to frequent breaks. When the players would have an encounter, almost every creature was new to them, even the ones that they had encountered previously. What information should their characters retain, and if it truly was a new creature, what should they actually know about it? Clearly if they were the more experienced team, it would be much more rare to encounter creatures that they had not read about before even if their characters had never seen them.

So, I was presented with a set of problems. How could I help the players and through them retain important information about the creatures that had already encountered? I also had to add to that which was how to limit what the more experienced players and their characters knew about the encountered creatures. How could I increase and limit information at the same time between the two groups?

The Pathfinder rules make it simple (taken from D20 for reference):

You can use this skill to identify monsters and their special powers or vulnerabilities.

Action: Usually none. In most cases, a Knowledge check doesn’t take an action (but see “Untrained,” below).

Retry? No. The check represents what you know, and thinking about a topic a second time doesn’t let you know something that you never learned in the first place.

At least those are the simple rules, but what information should actually be shared? Following through the different Paizo forums and different Reddit questions, it was clear that there was not a consistent answer that people used. So, as to make it easier for me and to improve the consistency of what information I would deliver, I decided on the Monster Card solution. I would create different cards that I could hand out to the players for the different success levels that they made. They would then be able to make notes on the cards as the encounter would continue. Things like AC, or special attacks and defense could be noted by them.

Best of all, it gave everyone a clear understanding of what their character actually knew about something. It would help the junior team retain information about a creature while helping the senior team limit their meta-gaming.

I still have to create these things. I started with the base information that was included for the creature. I also started with a false information page that if you failed your knowledge role, or knew nothing about the creature you would at least have something to start from. I decided to use 4×6 cards as my standard and would allow content to go between the two sides as needed. As I started creating them I realized I had to go back frequently and add different information, such as what the DC was, what knowledge skill was applicable, and just little details over time.

As an example, here are the pages I created for a Skeleton (CR 1/3):

The next step would be for a basic success, which ended up being on two sides of the same card. Again I am keeping mostly with the basic text that is given for the creature itself. I would much better if I started adding more color, but with the number of creatures that need to completed for each game, spending that time becomes precious. I can see myself coming back later and adding some of that color for future games, but not on the first run.

So besides the basic information what else might you be able to find out? In this case since skeletons are pretty simple, any remaining information all went on the next DC role. Much like goblins, these are not overly complex and it is easy to understand almost everything about them with only a little knowledge.

The back of the card with the undead traits would remain the same. But what about variants? Those would required a new roll hitting a new DC.

And then there are even the more powerful versions, which again wold require yet another roll:

I liked this solution. It allowed me to better control the flow of information and give the players something to hold on to to make their notes and better to bracket in what their character’s themselves knew and understood. Yes, more work for me, but I only create the cards for the creatures they have already encountered as well as the ones they will soon encounter. No reason to make cards for everything since they will never encounter everything. Although, over time, my card box of creatures will grow and it is easy to print off a couple extra when needed.

Time Waits for No One