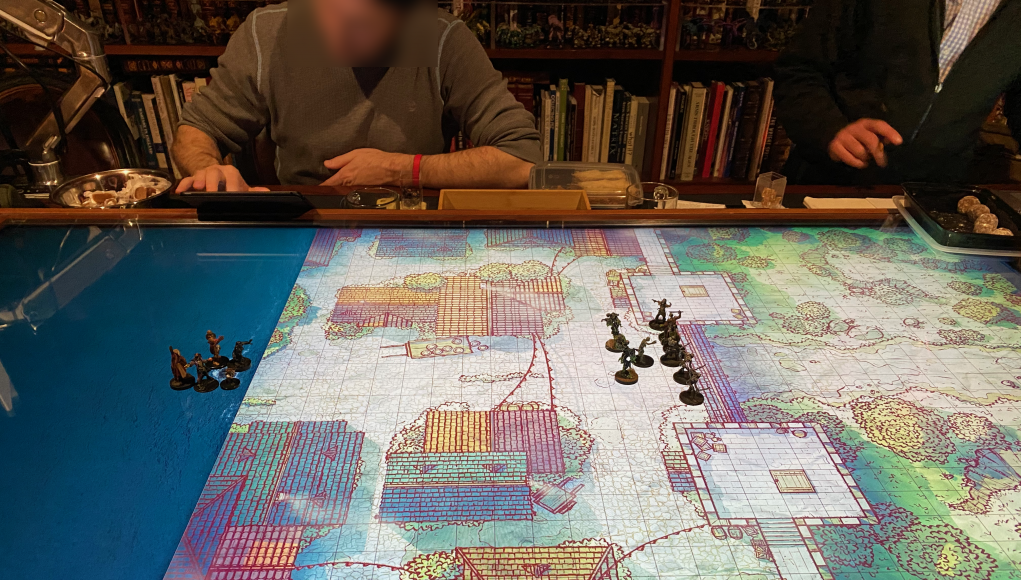 After using the table for a couple of years and getting a good idea of what worked out, we thought it might be a good time to start looking into what we would want to do next. My plan was always to put a TV into the table for Virtual Table Top Gaming, but not knowing when that might happen, or exactly what form the TV might take, I did not plan any holes or power in the space where the TV would reside. Besides, I am not sure how easily we would be able to adapt to VTT for our games.

I and my fellow game master did spend some time investigating the different VTT software applications available and they overall were a disappointment. They did not seem very well developed a few years ago when this journey with the gaming table started, and even today they seemed to be either overly cumbersome or lack many fundamental features. Worse than that, they either required live Internet connections or only ran on Windows bases systems. This lack of flexibility and difficult to use programs kept us from moving forward with the VTT plans for quite some time.

It seems that most of these are written by gaming enthusiasts with little software engineering backgrounds. The tools looks and feel like applications that were written more than 20 years ago. This is not how development and applications are built today for mainstream users and businesses. Yes, some of these can be powerful, but so is a hammer. We need something that is easy to implement and add to the game without taking away from the fun and at the same time not adding a large burden to the game master. At this time, none of the tools or applications available fit this.

But, it was finally time to start testing the concept of VTT, but I was not willing to fully modify the table to allow a TV to be mounted instead. So instead, we opted for something that could mount on top and allow us to start gaining experience with how we might utilize a new tool for gaming.

We built a frame that would sit in the table with external connectivity as well as open cooling. Since TV’s normally rely on heat rising through the box and rarely have fans, we placed a vent on each side as well as two on the bottom to match the bottom of the TV. We would be relying on normal heat escaping the box to reach some sort of equilibrium between the box and the outside temperature. We installed a WiFi based temperature sensor to be able to track what the exact temperature might be at any given run point. To ensure that there were not any catastrophic beer spills we added in a rubber seal around the bottom edge of the outside of the box. The weight of the box was sufficient to press it down and form a tight seal.

We also installed a monitor arm on the side of the table via clamp. That required a lot of custom construction because of the depth of the table exceeded any possible clamp for the arm. A Mac-mini was installed on the back of the monitor and we were ready to go. As a backup we also installed an AppleTV to the second HDMI port so that we would be able to have other types of extended tests.

Glare from the lights actually become a more interesting problem. There are two sets of lights around the table. Ones around the outside and ones directly over the table. The ones around the outside were the ones that caused the most issue and by keeping those off and adjusting the dim value on the ones over the table we were able to achieve a level of light that was acceptable. Good thing all the lights were made to be able to dim, otherwise we would have had much more difficulty in finding an appropriate amount of light for the table and the players.

And then some live play on the new TV. I ended up using a graphics program for the creation of the fog of war and used different layers for different rooms and revealed them one by one as needed. While not the best solution it did work very well once I was used to the flow. The secret really was in making sure I properly labeled all the layers so I could find them quickly.

As a part of the installation, we also added a 1/8″ sheet of glass on top of the TV to protect the screen of the TV. While that thickness seems overly thin, it worked fine and the possible sag to the middle of the TV was only about 1/16″. There was some creaking in the beginning, but nothing after a week or so. I had absolutely no fear in cleaning the glass, and my cats would regularly walk and sit in the middle of the screen without any issues. The glass did however present an interesting problem. One, it increased the glare, and yes I could have paid for glare-free glass, assuming I can find a vendor making some this large, but two, there was now a gap between the miniatures and the actual image. It is large enough to cause most of the players to have some difficulty in keeping the miniatures in an actual square. You can see some of that in the images below.

This worked very well. Inside the box it reached a maximum of 87F as long as the outside ambient room temperature remained between 70F and 75F. The maximum operating temperature of the TV is 95F, so we were within the safe limits. Even with 24-hour stress tests everything ran fine and the maximum temperature stayed the same.

While happy with the functionality, it did raise part of the table up an additional four inches which for our shorter players made seeing the top even more difficult. Standing around the table became more difficult especially with glare on the screen. There was a lot more adjustment time, but after a week or so, everyone was enjoying the new experience quite a bit more than the old mat.

evil.curmudgeon@gmail.com - 2020-04-10 0
This is the second in a series to talk more about the tables, its parts and how we are using it.