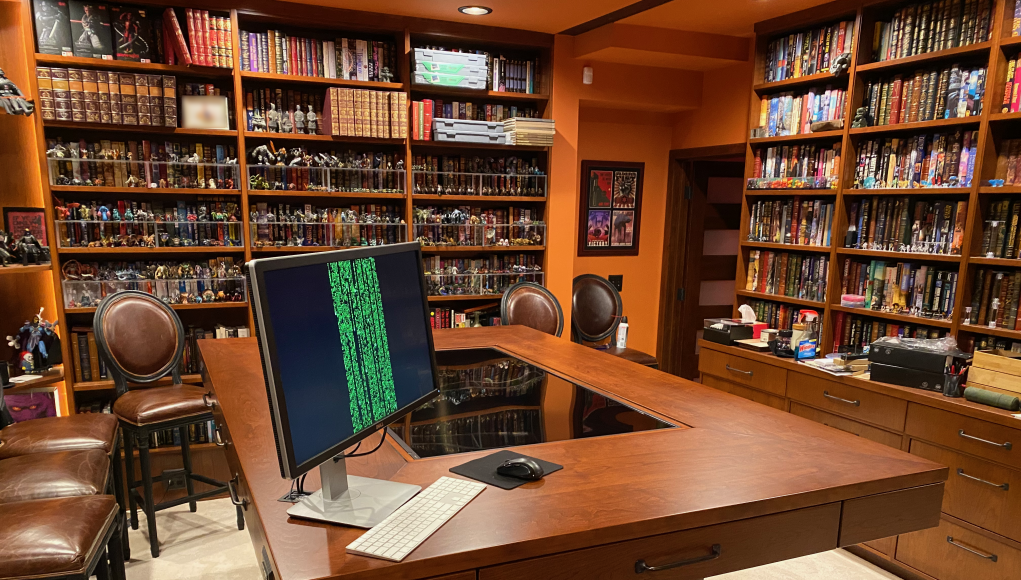 There have been a lot of questions about the details of how the cooling actually worked and how I am ensuring that the TV does not overheat in its now sealed environment. So, this page will be to go over the details of that part of the build as well as what specific hardware was used to drive all of it.

The basic concept that was used was to create a permanent cooling solution to anticipate the actual head load and then to make sure that there was a sufficient airflow to move heat out of the sealed box. I knew what the ambient temperature would be in a box without any assistance from fans or other forced air solutions from my previous experience with the initial install of the TV in a box on top of the table. But I also knew that when the TV was dropped into the table itself we would be sealing it in much more than the first experiment.

Flat screen TV’s are not usually cooled using fans but instead rely on the heat to rise through the components. The TV will have vents on the bottom as well as vents somewhere along the top of the components, usually in the middle of the back of the TV. By having the TV on its back, that natural flow of hot air would not be what the manufacturers were expecting and I would have a problem of the temperature increasing by having that heat trapped. In the first Box installation there were vents on three sides of the box that allowed a slow leakage of that hot air and would reach an equilibrium with the ambient room temperature. The new installation would not allow this since the TV would now be mounted inside the table with solid walls on all sides.

So, a new design was needed. The diagram below shows this concept.

This shows the expected air flow as well as where I would have fans installed to ensure that I could force air if needed. The black boxes in the diagram are where fans would be installed. The idea was to use the first set of fans to pull the cool air in and into the TV. The fans within the table would then pull the now heated air out. The primary air intake is nothing more than a simple vent, but it was a third place that I could install fans if for any reason there was not sufficient air flow to cool the TV.

Yes, the vent is below a drawer and I had some concern that it would interfere with the pull of air, but the four 80mm fans were able to pull enough air such that it was easy to feel that flow where the vent was. In fact, that air flow was slightly uncomfortable because it made for cold legs if you were wearing shorts or something else that left your legs exposed.

The two dual 80mm fans as well as the two triple 120mm fans are both from AC Infinity. For a controller I ended up with the AC Infinity Controller 8 to give me the most amount of temperature probes and the most options for installation. I spent a fair amount of time looking for a good solution that was less DYI and more professional looking and for ease of implementation. I bought them weeks in advance of the install so I could see how well they worked, how much noise they made, and how the controller worked. I wanted all the parts perfectly functional before trusting the installation.

One thing I discovered, and was not really surprised about was that the 80mm fan units, even at their lowest speed, were very audible. Whereas the 120mm fans were nearly completely silent. I thought about replacing the fans with better ones but was not willing to go that far yet. Perhaps once the fans were installed they would not be as noisy as expected. The 120mm fans were just great and performed well and better than expected. If the 80mm fans continued to be too noisy post-install, it would be pretty simple to replace them later.

Here are the during and post-install pictures. Showing the starting of with the intake air vent through to the 80mm fans and out to the 120mm fans.

To control the fans and make sure they would be able to operate automatically with a single temperature probe, I first tried putting all the 80mm fans on one set of power cables and the 120mm fans on another chain from the controller. From the manual it seemed to imply that the controller should be able to power that number of fans through two ports but the reality was that it was not able to, and I had to use all four fan power ports on the controller. This also then meant I had to use all four of the temperature probes to control each set of fans. There was not an option to tie one probe to multiple power ports. Each fan had a probe terminate near where the fans were installed. While none of them were in a perfect location for tracking the temperature, it was fine for this install. To make sure I had an independent source of temperature tracking, I also installed a TempStick. This allowed me to have WiFi tracking of the temperature since the AC Infinity controller was very much lacking any remote tracking and management.

The TempStick is an interesting device. I would have preferred something that I could have plugged in for power. The TempStick works great and is easily portable. But if you want five minute temperature data points, the two AAA batteries will run out of juice pretty quickly, and probably not last more than a few months. This means I would have to reach in and grab it to replace the batteries somewhat frequently. I ended up just setting them for the default 30 minute temperature check which will allow the batteries to last somewhere between six and 12 months. That time is based off all the others that I have installed around the house and outside. Being able to pull the data in remotely as well as configuring it definitely made the TempStick the winner for me.

All the fans are powered through chained USB cables connected to the controller. One immediate problem that occurred was that almost none of the cables were actually long enough to reach where the controller was installed. There was not an option to purchase longer cables, so a simple USB extender cable was used. I used one for each of the chains to make sure that all the cable lengths were the same just in case the impedance caused some sort of issue with the different of lengths of the cable for power. These extenders were tested pre-installation as well to make sure that worked too.

I played with different temperature settings and controls to see what worked best. The 80mm fans continued to be audibly noisy even after the installation. The 120mm fans were still nearly silent. With any amount of conversation of the players, the 120mm fans noise was easily covered. Another interesting benefit was that the 120mm fans were actually sufficient to carry almost all the cooling by themselves without needing the extra air flow from the 80mm fans. This allowed me to set different temperature set points on the two sets of fans such that unless things got much warmer inside the box, the 80mm fans would not need to fire off. This kept the noise down, and did not chill the person sitting at the air intake vent location.

Overall I am very happy with the installation and the hardware I used. I really would have liked to have seen that the controller had WiFi access to track the temperature and even manage it. The 80mm fans were a little of a disappointment, but the 120mm fans were much better, so a break even there. There were many options to configure the controller that allowed me to create an environment that make noise and airflow controlled and would not detract from game play. The whole point of all of this was to improve game play and continue down the path of Virtual Table Top gaming.

evil.curmudgeon@gmail.com - 2000-01-01 0
I have been playing role-playing-games since the mid-70's. I cannot actually remember all the different games I have played at this...