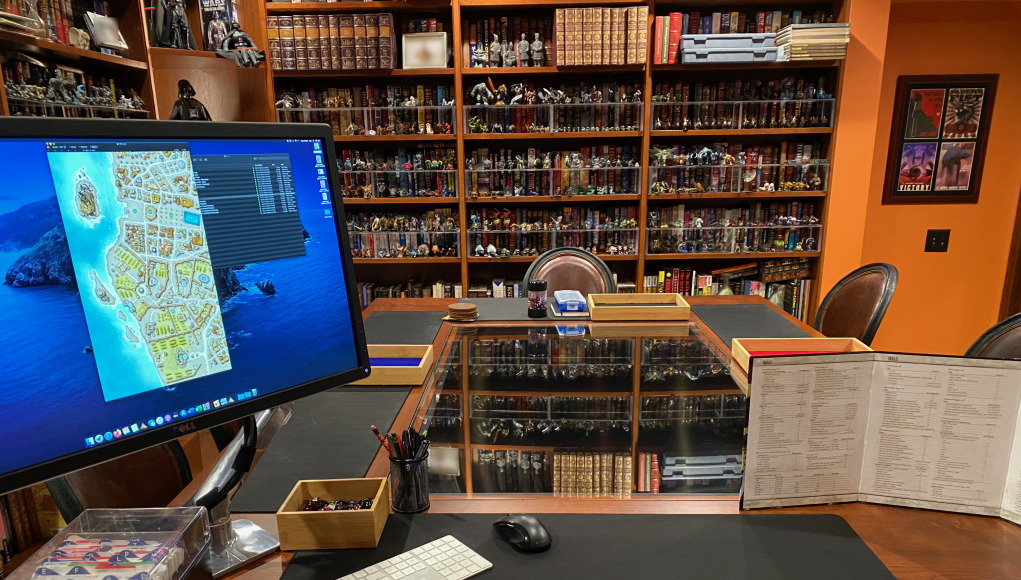 While the table is pretty awesome and everyone enjoys playing on it, I would be remiss if I did not look back on the points where it fell short, or I should say, where I fell short in the design. That fell into several areas.

At some point a firm decision had to be made on how tall the table would be. When looking at this, it seemed that a more controlling factor was related to what chair would go under the table. There were three possible heights that I could choose from. Since I knew what style and vendor I would use, I had a very set value for those possible heights.

This gave me an under the table height of 20″, 26.5″, and 30.5″. Added to that would be leg height and space to move in and out of the table. I assumed 5″, therefore giving me an under table height at 25″, 31.5″, and 35.5″. From there, it was a calculation of top down instead. What was the maximum height I wanted the table to stand? Also planning on storage between the table top and the bottom of the table in the format of drawers. I was limited to how much I could add between the two spaces.

My considerations were that I wanted a table where we could sit or stand at as needed. That precluded the standard table height and put into either counter or bar heights. A normal counter is at 36″, although all my kitchen ones are at 38.5″, and a normal bar height is between 40″ to 42″. Making the assumption that more is better, and bigger is better. I went with the 42″ height and bar stools. That then determined the amount of space left for the drawers as well as how deep the alcove would be to hold a TV.

And there lies the arguments. I am a bit taller than the average person while at least half of my players are female and are of average height or less. This means that the end height I chose is not as optimal for them as it is for me. The chairs that I had selected are fairly tall, and while not heavy, can be cumbersome to move. And almost no one’s feet can reach the floor when sitting leaving everyone feeling a little more lilliputian than normal.

It is hard to make the call if I choose the correct height or if counter height would have worked better. With our iPads and character sheets on the table, the current height works very well while sitting or standing. Counter height would have been lower and had more bending over, but – more of the table would have been reachable to those with T-Rex arms. The end result is mixed and that is almost completely driven by the height of the person. I am happy about where it is.

This is one area where I had the most failure. In planning the drawers I had thought there was plenty of space based off the depth of the table top and the amount of desk space left over. What I did not figure in for was the thickness of the table top, bottom, and how much space was lost due to the soft close drawers.

I started of with 5.5″ of space, but once constructed my drawers only had 1.75″ of height inside the drawer, and 2″ before hitting the insides. That was tragic mistake in that my wonderful storage drawers became almost useless. To fit any type of useful boxes or normal items inside the drawers, I really needed 3″ of space and I am woefully short of that.

To fix this, I could have easily added an inch to the height and stolen an half an inch of the leg space while still providing sufficient space to sit. Also, if I had gone with counter height, I could have added a little more space, although everyone sitting at the table would have felt more like a child than normal as the table would sit very high from normal.

The other issue with the drawers are the length of them. The two sets of three drawers on the long side of the table really needed to have 12″ of space within them to allow a full size sheet of paper to fit in. You can see from this image how well standard paper fits into the drawer. The biggest limitation to making the drawers much deeper was the maximum size of the room and the larger TV size that I selected to eventually be placed into the table.

Generally the side drawers were an almost complete failure, while the end drawers are much deeper, they also fail on the height as all the rest did.

Alcove, AKA the TV Pit

The design issues and concerns here are a mixed bag. Since I was not sure about what TV would be in place I did not really plan appropriate holes and conduits for cables and power. The reality is that almost all the flat screen TV’s would have been similar enough to have allowed me to have better planned for that eventual insertion.

This would have allowed for a more graceful install later, as well as allowing it to be reversible since the planned infrastructure would have been part of the plan and been directly incorporated into the table. Instead I can only go forward and embrace having the TV there because the amount of damage to the table is not recoverable. In fact, it would be better to just have the entire table rebuilt at this point if I am not happy with what has happened to it.

The table is very nice. Most of the issues, besides the drawers are mostly minor as long as we are happy with the current final form. It works well, and I expect many more years of game playing on top of it.

Where else would I go with this? Well everything else would be focused on the TV. What I really would like to see is a full multi-touch screen. This would would allow much a much more close experience for the players. I will be waiting for the price of those to drop quite a bit more before I replace that current TV.

evil.curmudgeon@gmail.com - 2013-06-29 0
The dream of many gamers is that moment when you have enough space, cash on hand, and a burning desire to put...

Time Waits for No One

evil.curmudgeon@gmail.com - 2017-06-23 0
It is a new glorious piece of furniture. It worked out better than I expected. Although the measurements for the...