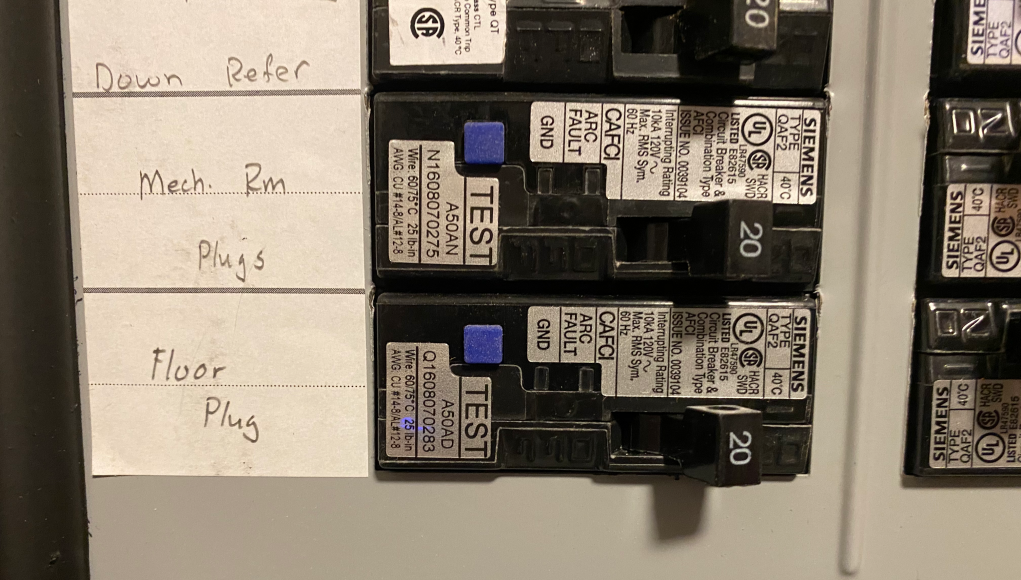 Recently there has been a lot of interest in some of the details about the Gaming Table that we are using. More specifically, interest in what parts were used as well as how we are managing the games with our set up. With this article I will talk more about the cabling and power into the table.

Understanding that with the modern world, there would be the need to not only power the large selection of devices that each player would bring, but I would also need to be able to power up portions of the table itself for future VTT play. If you look at the basement construction project you will be able to see that we were able to start from scratch and plan for power and other possible connections to the table space.

To future proof the space and to make sure that I could upgrade cabling and power in the future, a pair of conduit pipes were laid out between the server room and where I hoped the table legs would go. One pipe went to the server electrical sub-panel and the other to the server room structured wiring terminated. Here you can see where the conduits terminated in the floor:

And here they terminate in the server room:

As you can see there is a 20A line to the table area and four Cat6 cables. One of the Cat6 cables was later redirected to go between the LED lights and the transformer leaving me with three Ethernet cables. I was not sure if I would actually use the Ethernet connectivity, but added it in just in case. It was easily to put in while the floor was missing, and cost very little compared to everything else. Also given that I had the conduit pipes, I could always string other cables to include more power in the future if I really needed to.

In actual use, I have not yet used any of the Ethernet cables. My thought around it was POE or direct connection to the future computer and TV. Instead I have a fairly powerful wireless signal covering the entire basement that has so far proved to be sufficient for not only the table, but for all the players. Maybe once we start utilizing VTT much more heavily I might revisit how we are handling the network connectivity.

Ignore the labeling of my structure wiring. The cable guy clearly failed in his ability to properly install cable in a contiguous manner and put together areas that should all actually be together. It is on my list of something to rewire in the future to make it cleaner and make more logical sense. I will admit that my OCD occasionally flairs up when I go in there and see it.

In the floor are the two boxes where the cables terminate. The table itself has the equivalent of a power cord that stretches down into the floor panel and plugs into one of the outlets there. I originally had a pair of very nice cast iron floor plates to go on top, but since the table pedestal completely covered up the panels, there was not a reason to keep those on. Within the table itself the power cable starts one side and connects up all the corner outlets in a series much like you would normally do in a room. We just did it in a table instead. This simplified the wiring and since all the wiring could be installed a head of time, it was easy to ensure that we could conform to code and have real electricians install and certify the install.

You can see some of this cabling here:

The cleats were for holding up the table leafs that covered the alcove and gave the table a flush and flat surface. Now I have a bunch of solid cherry leafs with no home and just sit in the mechanical room in the basement.

Installed in each corner on the long side of the table was an outlet with with USB A and C 5v/4.8A charging ports. Again, planning on the different types of devices I put in both types of charging ports knowing that not all of our players were as much an Apple fan boy that I pretend to not be. All of the hardware I ordered was in black of course.

The plates that cover all the outlets are the same throughout the basement and those were purchased at House of Antique Hardware. With all of that I could not easily have the players power up all their toys, whether it was laptops, tablets, or their phones as they pretended to not hear the ring every time there was a home emergency that only occurred on game night.

With that we have properly powered the table and provided for some limited future-proofing. My hopes were that I would be a sufficient planner and designer to have all the parts in place and not need to upgrade much in the future. Power has been plentiful and we have easily been charging nearly a dozen phones and tablets at the same time with a pair of laptops. Occasionally there is a little jostling when someone’s power plug is large enough to overlap on to the USB plug. Something for me to think about the in future to consider how to improve that.

evil.curmudgeon@gmail.com - 2017-06-23 0
It is a new glorious piece of furniture. It worked out better than I expected. Although the measurements for the...