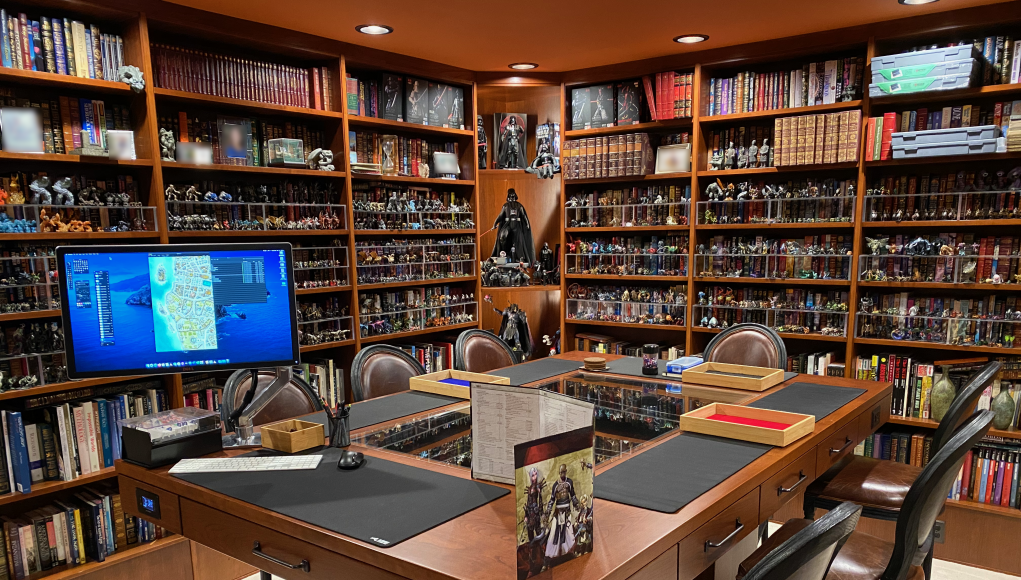 Well, after a few month of use, everyone enjoyed using the screen. It is a high success. Even being able to draw in spell effects was nice to be able to see clearly and while not everyone liked the exactness of it, it scratched a nice itch for me. One of those hard to reach and soul fulfilling scratches hitting that itch that must be scratched.

It was time to get rid of the box and drop that TV in. This was a one way trip. There was no going back. We were going to cut in some major holes that just would never be repairable once we start. It was a scary thought about if anything got screwed up. This was definitely one of those times where we measures a dozen times before cutting, and then measured a few extra just before. And then were afraid to measure afterwards.

We need to move the MacMini into one of the drawer areas and have sufficient pass-through areas for all the cables. The LED system needed to be pulled out. Fans would have be installed since we no longer would any form of cooling once everything was buttoned up. We needed to remove the LED controller and replace it with the fan controller, and move it to the other side of the table to shorten cable lengths. There was a lot to do, and all of it irrevocable.

We also planned on putting a new piece of glass on the new inside box, but this time we would be sealing it with clear caulk to prevent that beer-o-gadon happening on the now flat surface. We also needed to cut in an extra hole and make a hatch to be allow us to push the TV out when it needs to get replaced. The hatch was attached with some metal washers and rare earth magnets. The part that I was happiest about was the new fan system. With four 80mm fans pushing air into the TV and six 120mm fans pulling air out of the box, all of which with their own temperature probes, the new cooling system was fantastic.

Overall, besides the mass destruction that occurred to the table to make it all fit, I am very happy with the new design. Having the TV inside the table was a great move and game play has improved with everything being level. Although now we have many more errant dice causing us to enforce the use of dice boxes. We started with some smaller bamboo boxes with felt on the bottom, and moved to larger bamboo boxes with felt.

The last part of the installation was to mount the monitor arm into its permanent location and into the table itself. With a screen protector attached to the monitor it now provides privacy for the game master and any nefarious look ups or details that are needed while being able to hide them from any of the players sitting to the side.

evil.curmudgeon@gmail.com - 2020-04-10 0
This is the second in a series to talk more about the tables, its parts and how we are using it.

evil.curmudgeon@gmail.com - 2020-04-13 0
Today I plan on talking about how the play changed, improved or not, since we now had the TV installed. Just...