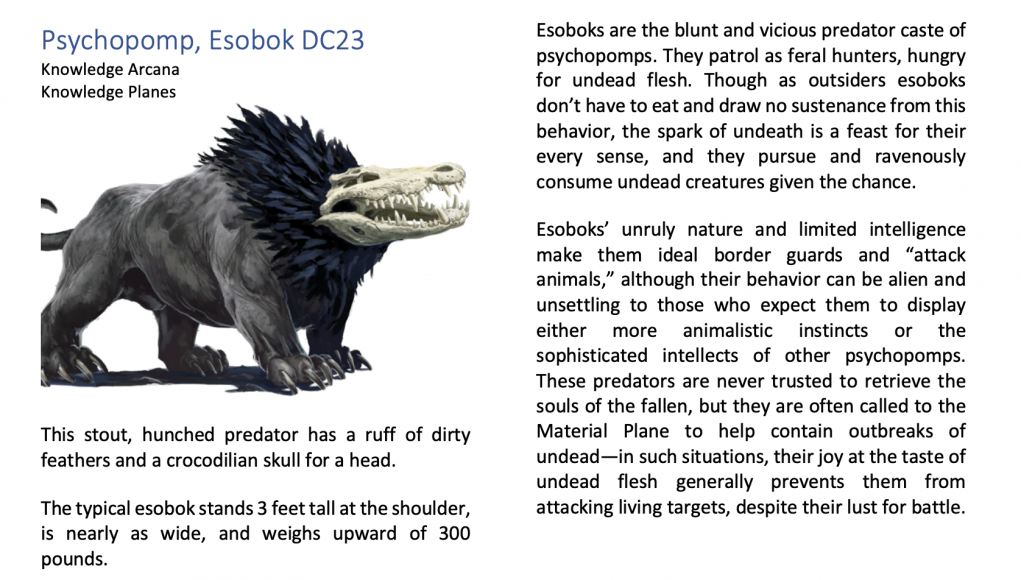 During a somewhat recent game with my senior team, an interesting misbehavior occurred. Not of the players, but from the monsters they encountered. The players were expecting one behavior of the creatures and were presented with something outside of that expectation, and it seemed to have upset one of the players because of that incongruity.

I was running two games a week until earlier this year, when everyone needed to properly stay home and shack up like a hermit and treat everyone the diseased beasts that they are. The senior team has been going through the Mummy’s Mask modules. They have already completed the first module and are working their way through the second one. It has been enjoyable, although there have been a few oddities in places. I plan on going through the first module here in the blog some time later talking about the specifics of that module.

One of the things that I have enjoyed a lot out of the Mummy’s Mask modules is the introduction of non-standard creatures. Creatures that not only is my senior team is not familiar with, but neither am I. This means that the game is much more refreshing and new experiences come up regularly for myself and the players. This also means that all of us got to learn about these creatures together and the players could be surprised regularly with something they most likely had never encountered before in any game.

Now, the specific encounter where we had some information mis-matching occur was the one called “EVENT 3: Dogs of Death (CR5)“. I’ll quote it near exactly:

Creatures: The Voices of the Spire, a militant arm of the Pharasmin priesthood, have reacted to the undead incursion with extreme force. Against High Priestess Sebti’s orders, the Voices’ commander in Wati, Nakht Shepses, is considering summoning esobok psychopomps—near-mindless hunters who feed on negative energy—to counter the undead horde. On Shepses’ orders, one of his subordinates has used a summon lesser psychopomp spell to summon two esoboks to test the strategy.

As the PCs approach a street intersection, a trio of zombies threatens a lone woman. Before the PCs can intervene, a soul-shaking howl fills the air and a pair of hideous creatures—horrible masked amalgams of bear and crocodile—burst from an alley. These esobok psychopomps tear into the zombies, felling them but injuring the human woman in the process. The esoboks begin feeding on the decayed flesh of the slain undead while the human, reduced to –1 hit points, lies dying in the street. She loses an additional hit point each round, and dies when she reaches –10 hit points. The esoboks growl and snap at anyone nearby, but if anyone approaches within 20 feet, they scream and attack, offering a preview of the effect this solution could have on Wati, as the city’s residents find themselves caught between the two armies of monsters.

Development: If not slain before then, the summoned esoboks fade away 2d4 rounds after the PCs arrive on the scene. PCs who succeed at a DC 10 Knowledge (arcana) check realize that this means they were likely summoned creatures. A successful DC 13 Knowledge (planes) check identifies the creatures as esobok psychopomps. If the PCs inform the priests of the Grand Mausoleum of the esoboks’ presence, High Priestess Sebti responds with fury, leading to a later confrontation Nakht Shepses (see Event 4). Alerting the town guard or Shepses himself results in the heroes being told to keep the information to themselves to avoid frightening the citizens and putting undue stress on the church in this time of crisis.

Story Award: If the PCs slay either of the two esoboks, award them full XP for doing so as normal. Defeating these two psychopomps and returning them to their home plane reduces the Panic Level by 1.

And here is the Monster Card for the Esobok Psychopomp, that is taken directly from the bestiary:

The part where the player read and assumed a friendly behavior was this “their joy at the taste of undead flesh generally prevents them from attacking living targets, despite their lust for battle.” which in theory would be contrary to the module behavior description of “The esoboks growl and snap at anyone nearby, but if anyone approaches within 20 feet, they scream and attack“.

So, this specific player assuming everything was good, ran up close and did a channel ray to heal the poor innocent victim, and then subsequently moved closer to help save her. The healing he did was not sufficient to revive her, but she was no longer bleeding to death. Of course once entering withing the specified 20′ the creatures reacted as the module dictated and ran over to attack him. This action by them was quite upsetting to that player. He had made a successful roll to get the maximum amount of information on the Esobok Psychopomps and felt betrayed by the knowledge he found. In fact, he threw down the monster card and exclaimed that they were useless and all full of lies since this creature did not follow what he read.

There is a lot of room for interpretation in all the different descriptions. Admittedly you might assume a specific behavior, but since these are summoned creatures, they will have certain rules of engagement imparted upon them as a part of their summoning. The player took the Monster Card information as completely accurate and exact. But as in any role-playing game, there is always some wiggle room for things to happen outside of your expectation. One of the reason this is role-playing and not a game of Checkers is that variability that can happen at any time.

Remember that this is the senior team. Yeah, it was a poor reaction and should have just marched on and dealt with it. The Monster Cards are given out for the players to make notes on. This was a great point to make some notes about the more specific behavior that they experienced.

I actually had many other issues with this encountered than a simple behavior issue. The spell to summon an Esobok Psychopomp requires a 9th Cleric. The spell will last a maximum of nine rounds. The range of the summoning is only 45′. This means that the cleric that did the summoning would have to be fairly close. The Esobok Psychopomp can move a maximum of 80’/round, assuming they are not able to run or have some other sort of movement. This means that since they can be around for up to eight rounds from the encounter notes, they could have moved 80′ putting the summoner only 125′ away. This is a street encounter of a town that mostly has wide and straight streets. The summoner without much movement would be able to see the encounter and intercede if needed.

The module on the other hand implies these are being pumped out at a certain rate and just let loose. But with the short duration of the spell, it would be very useless except around the immediate area near the summoner. Worse than that is why would a 9th level Cleric use a 5th level spell to take care of a few CR 1/2 Zombies? What a waste of a spell when that cleric could just as easily just walk over and pummel them and most likely be armored heavily enough for them to never be able to hit him.

This level issue is further exacerbated by the fact that it is implied there are several of this level cleric and their boss at a minimum is 11th level to be able to summon the next more powerful Vanth Psychopomp. Why are they relying on a bunch of 5th level player characters to save the whole city? With just the cleric militant force of an 11th and several 9th level clerics they would be able to stomp the whole undead invasion without an issue.

Yes, yes, because…. Magic, plot armor, story line…. bah. At least add in something to have to make more sense instead of me making up new story lines to cover for these plot line issues.

I had a player that objected to the exactness of the Monster Cards verses what happened. Meh. Told him to move on. You know… because Magic, plot armor, and story line….

evil.curmudgeon@gmail.com - 2020-04-13 0
Today I plan on talking about how the play changed, improved or not, since we now had the TV installed. Just...